By Kent Berk on March 7th, 2014 in BLOG, DISCRIMINATION 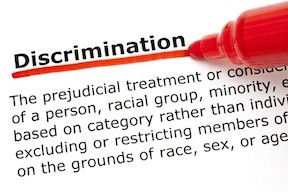 Recently, Arizona was thrust into the national spotlight over the passing of a controversial bill by the state legislature.

The bill, SB 1062, amended current Arizona statutes relating to the free exercise of religion. Among other changes, the bill extended protection from discrimination lawsuits from only “a religious assembly or institution” to “any individual, association, partnership, corporation, church, religious assembly or institution, estate, trust, foundation, or other legal entity.”

According to the New York Times, “The bill was inspired by episodes in other states in which florists, photographers and bakers were sued for refusing to cater to same-sex couples.”

The bill’s supporters argued that the bill protected the religious freedom of business owners. “This bill is about preventing discrimination against people who are clearly living out their faith,” said Arizona Senator Steve Yarbrough.

Critics saw the bill as discriminatory and were disturbed by the bill’s broad language. They argued that the bill could potentially allow business owners to discriminate against virtually any group that didn’t align with their religious beliefs, including gay people, unwed mothers, Jews, Muslims, atheists, and so forth.

The Arizona legislature came under fire from not only the American Civil Liberties Union but also many business groups, who feared that the bill’s passing would harm the state economy by encouraging businesses and tourists to go elsewhere. Big names such as Apple, American Airlines, and Intel joined the chorus of critics. Many worried that a repeat of the 1993 Super Bowl would happen: that year, the NFL decided to move the Super Bowl from Arizona to California—potentially costing the Arizona economy millions—after Arizona voters failed to approve a measure making Martin Luther King Jr. Day a paid state holiday in 1990.

The bill landed on Governor Jan Brewer’s desk on the last week of February. After much speculation from the media, Brewer decided to veto the bill. She said that the “broadly worded” bill could have “unintended and negative consequences.”

Business owners who are concerned about complying with local and state laws, as well as employees and customers who feel that a business may have violated discrimination laws, should speak with an experienced Arizona attorney.